Listen on the go!

Last month, Amazon launched Honeycode a no-code/low-code platform to develop apps. While Google and Microsoft had already been in this market with their AppSheet and Power App platforms, the recent entry by another tech behemoth hints at the untapped potential of this market—the ones realized during the pandemic.

As the world went into lockdown, digitization processes accelerated. Companies were forced to adapt to the new normal and using technology to get things done became more necessary than ever. Among these were Virtual Assistants, which witnessed a surge in uptake during the Covid-19 outbreak as they became a necessary part of many businesses—from call centers and banks to healthcare and HR.

But not every virtual assistant platform was up to the task. We saw that two types of organizations fared better than the rest; those who had already adopted digital transformation and those who relied on no-code/low-code systems—the latter because they could quickly adapt.

The importance of a no-code/low-code approach

A no-code/low-code approach has many benefits. It decreases the dependency on developers which means less effort spent on customizations The departments who need these programs can build the system as they envisioned it, in low turnaround times. They can also quickly change and alter the product along the way without requiring extra costs. This essentially means users can design applications without any coding knowledge, by simply checking/unchecking the features or using only a drag and drop interface to program the logic. These features act as a means to engage more organisations to adopt the platform rather than as prohibitive mechanisms.

Putting the power in the hands of users has thus been a huge benefit, particularly as the working environment has changed and companies need to update their policies and inform their clients as well as employees about them.

Only Virtual Assistants built on no-code/low-code platforms proved to be useful, as they could quickly be updated with new policies and instructions without requiring a slow coding process or developers who may be unavailable.

Even our experience on the customer service call surge front has been insightful. Clients have reported that around 50% of the calls they received were successfully handled by VAs, which had a huge impact on their business as well as the overall happiness of their customers. Without a no-code/low-code platform, the surge caused from the pandemic would render the customer service operations significantly incapacitated.

Fortunately, we witnessed many companies who used our no-code/low-code VAs to build systems necessary for their clients., A connected LED lighting systems firm for instance, managed to reduce the time taken for a password reset from 30 minutes to 15 seconds. Because of their policies, a user previously had to offer different documentations to reset their passwords – a request that was sent almost 80 times per month. With the aid of VAs, the users have saved a considerable amount of time. And because Kore.ai offers a no-code/low-code platform, this industry leader in lighting systems was able to add that feature without any involvement from Kore.ai developers.

VAs are here to stay

According to a recent Gartner survey, 74% of CFOs plan to continue some form of permanent remote working, and that only means there will be a continued or even increased need to put the power in the hands of the end users. A no-code/low-code approach not only makes it possible for companies to rapidly develop and deploy new features, but also helps them overcome budget limitations particularly, during times where many businesses are contracting the world over.

Behind the scenes, VAs rely on Artificial Intelligence to deliver a human-like conversation. They may also partially leverage Robotic Process Automation features to go beyond simple question-answering and get tasks done. As such, they likely navigate a myriad of different platforms, but present a simple conversational interface to consumers which appears no different than regular small talk with a human agent.

We believe that for VA adoption to increase further, programming for them should not require users to be adept at AI development or RPA management – otherwise, it could defeat the purpose. Hence a no-code/low-code approach fits VAs – it simplifies a platform that was built for simplifying tasks. 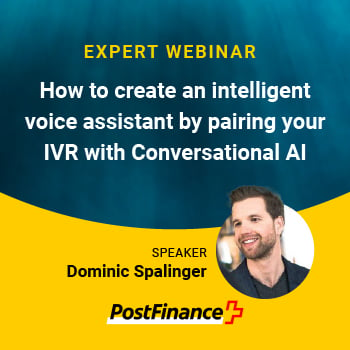